Drew Noble is once again in the kitchen, creating menus, collaborating with a team and ready to showcase the region’s flavors to guests at the lodge. It will be his first season with us, but to anyone who followed Vancouver’s food scene a decade ago, his name is a familiar one. 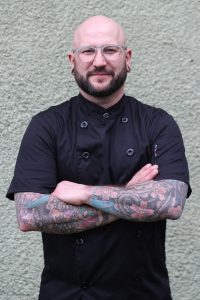 Diners this season can expect to see simple dishes that highlight the region’s bounty of fresh seafood, herbs, vegetables and fruits.

“I’m working with the staff right now to hammer out a menu so that they have ownership,” Noble said. “We’re a team and we’re going to have fun with the menu this year.”

Noble’s background is a familiar one for successful chefs. He worked his way up the ranks in some of Vancouver’s finer restaurants until he opened his own establishments when he was still in his 20s.

When he hit 30, Noble decided it was time for a drastic change. He traded in his toque for hard hat when he got his license as a plumber and spent the next eight years working in the oil fields.

The siren calls of the kitchen, however, were hard to ignore. But Noble’s return to the hospitality industry wasn’t what you would expect. He took a job as a dishwasher at another resort in the Discovery Islands.

“I didn’t include any of my cooking experience on my resume,” he said. “I just wanted to wash dishes.”

But during dinner service one night during his first season at the resort, Noble noticed the chef was struggling.

“I couldn’t let that happen,” he said.

Noble finished dinner service and went on to be the chef for the next three seasons.

Farr is thrilled to have Noble part of the team and his talent was an obvious allure, but the real attraction was his affinity for working in the region. 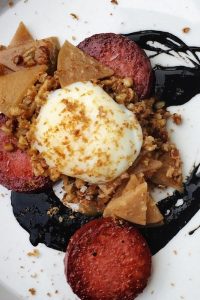 “Drew really knows how to work with the ingredients in the region and give guests a truly exceptional experience,” Farr said.

Noble shoots for dishes that he knows people will like, but won’t try to make at home. He likes to think of his cooking now as rustic contemporary that focuses on the deep agricultural ties to Vancouver Island.

“I like preparing dishes that rely on no more than five ingredients,” he said. “It’s clean and fresh as possible.

Even more exciting than the food is the staff that Noble inherits. He wants them to be as engaged and inspired as possible.

“My whole goal is that every single person in the kitchen is better than me,” he said.

Hence the reason for taking everyone’s input as they pull together a menu.

“I know that the food is going to be good and people are going to like it,” Noble said.